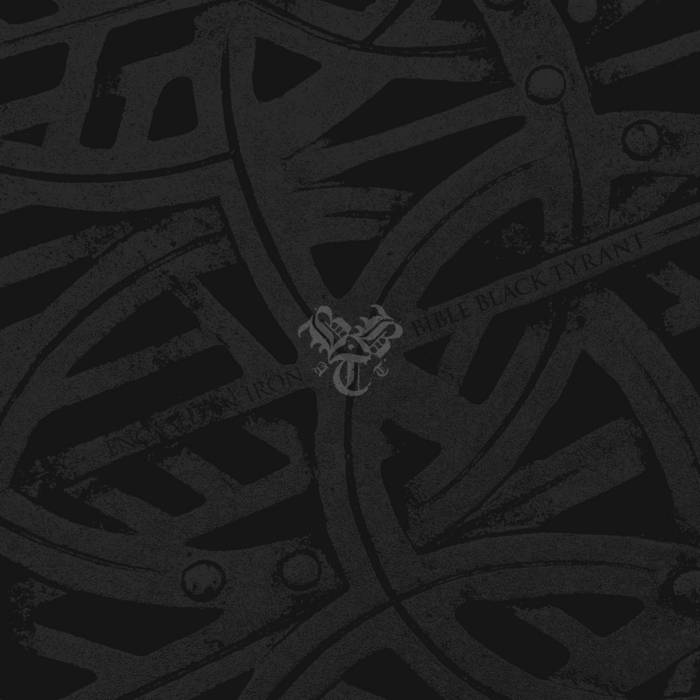 "Horns of war calling minions forth for ominous purpose... 'Encased In Iron' isn't necessarily an easily accessible vision. But for those willing to immerse themselves in a gut-wrenching, atmospherically tumultuous, journey into the darkness of man, BIBLE BLACK TYRANT have blazed a trail. Highly recommended. 9/10."
— Metal Temple

"A haunting mix of sludge and doom."
— Odymetal

"Bible Black Tyrant‘s second album is a short barrage of down-tuned filth, slow pacing and crushing rhythms render you helpless so Edge’s shriek of pain... a disturbing journey that spirals downwards into a black pit of despair. For an album so short it sure feels longer, beating you into submission. Slowly. Stunning once again from a man that proves there is no obstacle too big to overcome."
— Verbal Aggression

"The songwriting is narrative, almost a storytelling which approaches a real concept album, whose bitter expression presents the torture in which life consists, and it does in a bloody way, where the asphyxiation of an existence locked in an impenetrable iron cage is sublimated with the cry of liberation and disillusionment. These issues are not treated with frivolity, and are strengthened by a reason dictated by a cruelty that can, possibly, be traced back to the personal sphere of the mastermind of the band Aaron Edge. 'Encased In Iron' flows with the bases of an annihilating, ruthless and uncompromising riffwriting, which is expertly alternated with more relaxed and reflective moments, presented with the duality of a brilliance, allocating a thick layer of fog in the darkness that develops for the duration of the disc... oppressive riffs supporting hysterical dissonances. The vocals are heartbreaking, liberating and with a great emotional charge."
— Grind on the Road

"Vocals of pure evil, guttural, sickeningly preformed deftly... utterly barbaric... growl with real malice. The production on this record is completely excellent, everything is compressed and crushing without loosing any of the demonic dynamics that are on display, things end on a strangely keys-heavy melody that makes it well worth going back to find more of it in the mix. Battering, brutal and unforgiving... a war horn and an alien alert, unfamiliar and unwelcome, but by hell is it a battering worth taking."
— Distorted Sound

"...riff mountains, varied soundscapes, crazy rhythms. Bible Black Tyrant remains as unpredictable as unfathomable. Dark ideas and the amateurs of filthy atmospheres, those who like to listen to their music tight jaw and taut neck. Aggression in order, with complex musicality."
—Desert Rock

"Massive... something epic, squirms, roars, drooling, murmuring... something deeply evil, abysmal. And after just one and a half minutes of playing, 'Encased In Iron' shows more twists than whole records elsewhere."
— Heavy Pop

"...a gloomy nightmarish sound, with a dangerous vibe to them. Aaron’s vocals are hellish in tone and nature with the riffs striking the right balance of bleak sounds... fearful and brutal sounding, showcasing why Aaron and Tyler are quite highly thought of within the doom/sludge metal community."
— Outlaws of the Sun

"'Encased In Iron' is like a dark gray wall that is slowly approaching you, while a high, granite cliff wall is moving behind you… you are crushed between the the misery of this existence. Bible Black Tyrant takes a riff and turns it into a monumental ode to oblivion, in which hidden, repeating melodies are constantly present and give the whole a beautiful, coherent structure. This album picks you up and takes you along like a swirling, growling flood of dark water where it is all too tempting to go down, a warm, safe but stormy cocoon."
— Arrow Lords of Metal

"The Americans deliver 'Encased In Iron', explaining the dark thoughts of a fearful person, war drums rumble menacingly... it hits the eardrum like a pendulum."
— Stormbringer

"So much sound and riffs, with the harsh oppressive vocals. It’s a nasty concoction for badass music."
— Brian Ortiz

“Pummeling, tumultuous waves that pull you under. Through brief calm, you can breathe only until you are pulled under again.”
— Michael Pankow

"Dense, incredibly heavy. Tyler's drumming is so overwhelming and Aaron's vocals are on point, the atmosphere that the guitars create is so haunting."
— Victor Lucas

"Gloomy, atmospheric, and unexpectedly melodic. Thick guitar tones, full vocals, and heavy... the entirety of 'Encased In Iron' wormed its way into my brain.”
— Nate Duke

"Dense, brooding, melodic thunder that ebbs and flows like a tsunami of arterial blood."
— Christopher Eubanks

"'Encased In Iron' has everything I needed at the time I heard it. It pummels. Through headphones you still feel it in your gut. It’s creative song writing mixed with knowing how 'heavy' is supposed to work. 'Infinite Stages of Grief' is my favorite."
— Thomas Wilson

“If I want to watch the world burn, it will be time to sit and contemplate how to get it done... I’ll need an album to set the mood for this sitting in the dark hate session... the dirty old hesher version of me hiding in the recesses of my brain takes a huge hit off whatever he is smoking and says ‘Encased in Iron’, man, ‘Encased In Iron‘.”
— Rich Paulk

“It's exciting knowing that a continuation of Aaron and Tyler's doombaby exists and presents yet another escape into a dimension of absolute heavy. It's a most satisfactory venture into riffs of pure impending evil.”
— Jeff Rogers

Drums documented & mixed by Andy Patterson at The Boar's Nest.
All but drums documented by Aaron Edge at Myelin Studio.
Mixed & mastered by Eric Leavell at Husk Recording.

Ichabod Crane's mother (an innocent child of Nature) was murdered to save her soul by his father, a "bible black tyrant, behind a mask of righteousness".

(With past sonic contributions via
David S. Fylstra)

Bandcamp Daily  your guide to the world of Bandcamp